A lot of people who learn Japanese do it in their home country. Which is great, but they often never consider actually studying it in Japan. Visiting Japan, sure, but never to go for a long period to study it. But there are so many benefits from studying in Japan!

It was my friend who suggested we studied in Japan and I’ve studied there two more times since then! I loved it so much, it’s well worth going if you’re serious about Japanese.

NOTE: It seems like many people think I’m talking about studying at University in Japan. But no! There are LOTS of Japanese Language Schools across Japan that cater to ALL levels of Japanese.

These schools have programs from 1 week to 2 years to study Japanese. There are NO pre-requisites for these schools.

I.e The school I studied at in Fukuoka has 3 month programs (which I did 2 of for 6 months) as well as reasonably priced 1-2 intensive programs that take you from beginner to N2 level Japanese. (Here’s my review of the school)

Let’s say (hypothetically) that you’re studying at home with a teacher, maybe doing around 2 hours of Japanese a week. If it takes 150 hours to learn the basics then it will take you 18.75 months or just over a year and a half.

If you study in Japan you’ll probably be doing at least 3 hours of Japanese a day. That’s 15 hours a week! Which means you’ll learn the same amount in 10 weeks! That’s 2 and a half months!!!

Learning at a language school puts you in a situation where you’re not just studying for at least 3 hours a day. You’ll also have homework, talking with teachers, talking with family, talking with friends, watching TV, reading ads. So those 3 hours can easily turn into 5-6 hours of using Japanese.

You’re CONSTANTLY exposed to Japanese and are learning it in a more natural way.

Sure you’ll learn the “textbook” stuff at school, but being in Japan lets you pick up ‘natural’ Japanese. The way families and friends use Japanese to communicate with one-another.

A great technique is to really listen to what others say. If you say something and they repeat the sentence back to you in a more natural way, that’s them correcting it! Repeat their correction back to yourself to help you remember it.

You won’t be speaking fluently right away, but the more you practice and talk with people the better you’ll get!

Learn from Natives (not just the language)

Learning from native Japanese people is a fantastic way to learn! You’re not just learning more natural Japanese, but about the culture and customs too. 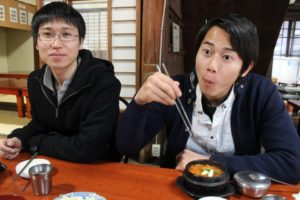 These all help with your language study as language isn’t just the language itself.

A large part of language is rooted in culture and customs, especially Japanese where you use different levels of politeness depending on your relationship with someone.

Make Friends (Japanese and other)

My times spent in Japan have led to some of the best friendships I could ever ask for. I have a number of Japanese friends but most are actually people from all over the world! I still talk with many of them and we’ve gotten even closer over the years because of the shared experience of studying in Japan.

And thanks to that it’s easier for me to make friends with Japanese people who are studying abroad in my city. This added to talking with Japanese friends online means I can practice my Japanese even though I’m not in Japan anymore.

Have an Amazing Experience

I have gone to study in Japan on three separate occasions, each time in a different place and leading to some amazing experiences.

If I’d never gone to Japan I would have never climbed mountains; never tried all the amazing food; never met weird mascots; never seen the castles; never bought my huge manga collection. And SO much more!

Each person’s experience is different. Sure there are bad times for some, but I find the good outweigh the bad and everyone I know who went has never regretted it.

Use the Language (not just study)

Studying isn’t the only way to learn Japanese.

When you’re in Japan you’re given the opportunity to use the language a lot more than if you did at home. Especially if you live with a host-family. You’re forced to speak it, read it and understand it on a daily basis.

Using Japanese is a lot more effective for getting it stuck in your mind to the point where you don’t even think about it when you use it.

“I Can’t Study in Japan Because…”

Often people are worried about studying in Japan and convince themselves not to do it. I have almost fallen pray to this myself, but am glad I pushed myself to experience something new.

I honestly think it doesn’t matter how old you are. The first time I studied in Japan was for 4 months when I was 18 and I met a 14 year old studying there by herself for 6 months!

I’ve also met people in their 30s-50s in Japan and other countries for short study visits!

It’s never too late nor too early to start!

The point of studying in Japan is to learn! It doesn’t matter what level your Japanese is, you’ll learn it out there! Sure, you will probably struggle at first, but you’ll also pick it up quickly. Everyone has to start somewhere, and it WILL get better.

There are people who go barely knowing the alphabets, but they apply themselves and end up understanding Japanese really quickly!

Then again I’ve met people who have lived in Japan for over 10 years a barely know the language. It’s a matter of how much you push yourself to try new things and learn.

I think that if you’re serious about wanting to study in Japan, you’ll make the time. Plan well enough in advance (1 year?) so that you won’t be busy by the time it arrives.

You also don’t have to spend a year in Japan. There are language schools with programs from 1 week to 2 years! (Although I recommend at least 4 weeks to see a dramatic difference in your Japanese abilities.)

This is a tricky one as it depends on the individual’s situation, but there are reasonably priced language schools in Japan. And don’t be afraid to spend a few months to a few years saving up for it!

I think if you’re determined, you can put together a plan to save up the money you need to do it.

At the end of the day the only person holding you back is you. If you want to study in Japan why not do it?

How to Choose Study Programs

There are a lot of different language schools and programs in Japan. What works for you will be very different from someone else.

You need to ask yourself some important questions to help you decide what kind of program you want to look into:

How long do you want to be in Japan for?

Do you want to focus on language or culture?

Do you want to stay with a Japanese family or do you need your own space?

What are your funds?

As I mentioned before there are schools which offer 1 week programs to 2 year long ones! But be careful, just because a course is short doesn’t mean it’ll be cheaper than a longer one. It varies from school to school so you’ll have to do your research.

This is discussed more here in Studying Japanese in Japan

You can also check out a directory of schools on Japanistry and GoGoNihon.