“I want to be able to read Japanese cook books and online recipes!”

The following recipes are some of my favourite. They have been transcribed and translated into Japanese from recipes by Cooking With Dog* (who is a Japanese woman on youtube that makes Japanese food with her poodle). The recipes are in pdf format with the recipe in Japanese with furigana (katakana over kanji) and an English translation bellow with useful words highlighted to help with studying. Recipes you normally find online or in Japanese books will only be in kanji without furigana, so it helps to begin recognising kanji and their readings in the context of recipes. But if you’re just beginning it’s more important to learn the words before the kanji otherwise you’ll recognise a kanji and won’t be able to read it.


(*One thing about these recipes is that they use inches and not cm. The original recipe asked for inches but in Japan cm and other metric terms are used and not imperial measurements.)

Fried pork cutlets cooked in a Japanese soy sauce mixed with onions over a bed of steamed rice. There is a tradition the students eat katsudon before taking an entrance exam because かつ means “to win”. This is a similar tradition to eating KitKat before an exam, which when pronounced in Japanese sounds like きっとかつ “defiantly win”. Download pdf here 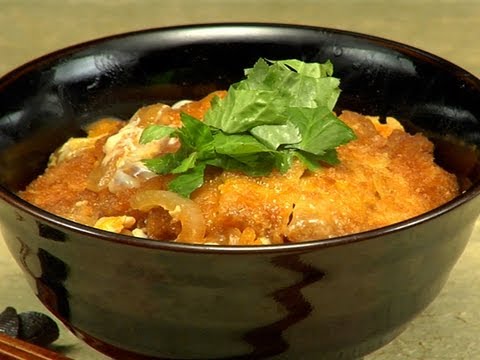 Sometimes described as a savoury Japanese pancake (although it’s really not), Okonomiyaki is a flour based sauce mixed with egg and cabbage and cooked with all kinds of ingredients, but normally bacon and octopus. Okonomiyaki literally means “grilled as you like it” (notice how お好み has the kanji for 好き/すき) so feel free choose your favourite ingredients to replace the octopus or shrimp this recipe uses. Japanese okonomiyaki restaurants will add cheese and squid, and will even add a fried egg ontop. The recipe also uses Japanese mountain potato (やまいも) to add to the texture but that is entirely optional. Download pdf here 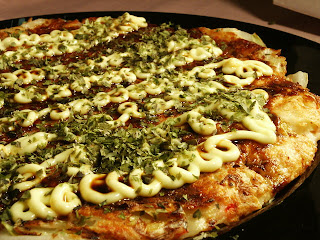 This is a Japanese hot pot that is very simple to make. The key is the sauce that is made up from soy sauce and other Japanese ingredients to give it it’s unique taste. This recipe uses very Japanese ingredients to cook in the hot pot (like shungiku which is edible chrysanthemum) but you can probably replace them with similar ingredients (like bok choy). In Japan you eat sukiyaki directly from the pan on a low heat and it is often dipped in raw beaten egg. Download pdf here

I’ve listed some of the more common sentences in these recipes:

たまごをふわりにあわだてます
卵をふわりに泡立てます – Whisk the egg lightly (“to whisk” is the word “whisk” (あわだてき) in verb form, just like English!)

３ぷんににたてます
３分に煮立てます – Boil/simmer for 3 minutes (boil and simmer are the same, so make sure it specifies a heat strength or temperature. But 沸かします/わかします also means “to boil”)

かつお風味だしの素を水で溶かします – Dissolve the bonita flakes into water. (This normally makes dashi stock which is used in a lot of Japanese recipes)

もちもちとした食感になります – Become a gooey texture (In Japanese there is a different word for the texture for something in your mouth (しょっかん) and the texture of something on your skin.)

Are there any recipes you’d like to try out? Or practice Japanese with?

Feel free to leave comments, questions and requests in the comments.