How to Get from Intermediate to Advanced Japanese

Many language learners hit this point around intermediate level where they feel like they’ve plateaued. It’s the same for Japanese learners, coming in at around JLPT N3 to N2 level.

This point, where you feel yourself stagnating, is the time to change up your approach to studying Japanese!

Here is how you get from intermediate to advanced levels with your Japanese learning.

Up until the plateau, most of Japanese learners’ time is taken up by studying. Especially if they attend Japanese classes. This means focusing on a textbook, studying for tests, doing homework; all important stuff to build the foundation for Japanese proficiency!

However, a plateau comes when a student feels like their learning has slowed or stopped, no matter how hard they study.

If you change your approach and focus on consuming Japanese media 70% of the time and studying to 30%, you will see a boost in your Japanese abilities!

Why It’s Time to Step Away from Textbooks

As a beginner you learn Japanese through rigid rules. This is important for a good foundation, you can’t build anything on a poor foundation. But Japanese people do not sound like textbooks.

Even media aimed at young Japanese children contains vocabulary and kanji that you won’t find in a textbook. (Sometimes even language beyond JLPT N1 level!)

Just like any language, the terminology and grammar used by native speakers varies greatly depending on context. Which means exposing yourself to a wide variety of contexts and subjects is the best way to learn native Japanese.

What You Want to Do

First of all, you can’t just jump in anywhere. You need to understand your own capabilities and consciously decide what you want to improve first.

I emphasis “want to improve” because “wanting” and feeling like you “need” to do something are two different things. One can lead to curiosity and enjoyment, while the other can make it feel like a chore. This is why it’s important to pick something you want to do.

Identifying what you want to improve can also help you pick things to consume.

This is not a matter of “I want to improve my listening” because “listening” can be applied to so many things. Instead, pick a genre or field you are interested in. It could be business, economics, history, fantasy, sci-fi, sports, religion, drama, horror, etc.

There’s even a chance you already have a list of TV shows or books you’ve always wanted to read in Japanese. That’s great! Now is a good time to start. Only… Are they a good level for you?

Select Material for Your Level

Wanting to jump right into The Tale of Genji in its original Japanese is all well and good, only you’re going to be hit in the face with incredibly difficulty language that even Japanese people struggle with. (It’s like trying to understand a Shakespeare play when your English ability is equivalent to a 10-year-old!)

The Tale of Genji in original Japanese is an exaggeration, but there have been a few times I tried to read material way beyond my level and this led to feeling incompetent, frustrated, and demotivated.

If you don’t feel this way from reading incredibly challenging books, then good!

But if you do then I suggest you try to not beat yourself over it (like I once did). 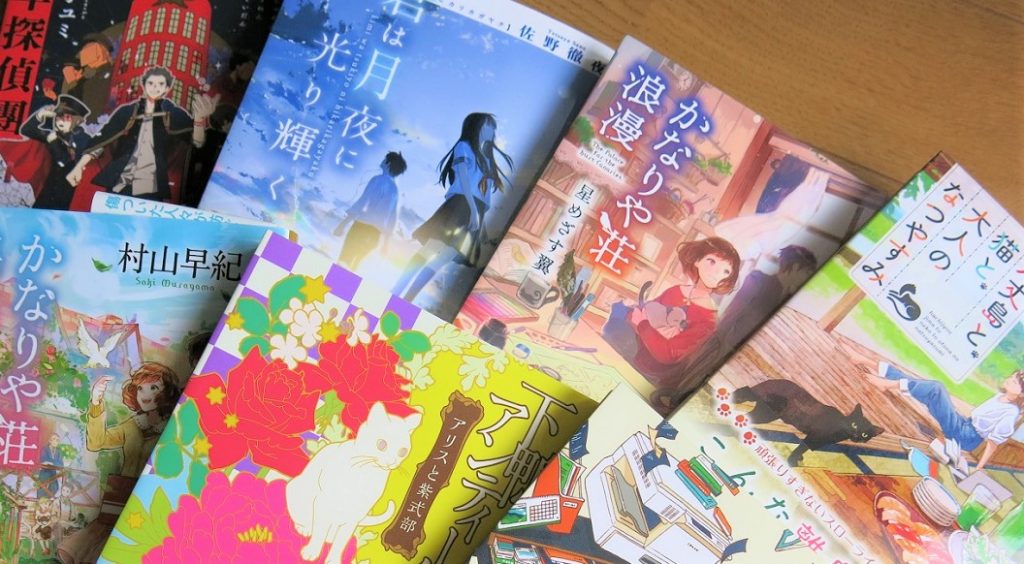 How to Find Material at the Level You Want

You want to find material for native Japanese people (and by “material” I mean novels, articles, TV, anime, manga, etc.) that isn’t too easy or too hard for you. (It needs to be Goldilocks level “just right”.)

You want to be able to understand the overall meaning while learning new things. If you cannot understand anything and have to look up new words every sentence, then it might be a little too difficult right now.

Here are a few ways to test if something is just right for you:

If you’re not used to listening to Japanese but want to try a particular TV show, movie, or online video, then try watching it with Japanese subtitles. Often your ear might not realize it’s listening to a word you know until you see it written too. Many Japanese shows on Netflix, AmazonPrime, and TVJapan (cable service for US and Canada) support Japanese audio and subtitles.

It’s worth checking if the shows you would normally watch have Japanese subtitles available!

Also note, that Japanese blu-rays work on American blu-ray players, and Japanese DVDs work on British DVD players. This means you can import Japanese media and watch them with subtitles that way too!

Look at reviews and/or ask

If there is something in particular you want to read/watch then the wider Japanese speaking community might have an idea on what level Japanese is being used. You can ask people’s opinions on forums or social media, or even look up reviews.

It’s Okay if It’s Too Easy/Hard

I know this contradicts what I just said, but I think it’s important to prioritize enjoyment.

If you’re tired and really want to just have fun without working to improve your Japanese that’s fine! Picking something to read way below you level is still good because you’re reading for enjoyment. That’s the point! To have good enough Japanese so you can have fun consuming media!

On the flip side, if you want to challenge yourself and read something waaay above your level, that’s fine too! Some people love to push themselves and read complex arguments and ideas that would be tricky in their own language. Even if you only understand 50% of what’s going, as long as you’re enjoying yourself, go for it!

Don’t Put Off for Tomorrow What You Can Do Today

I used to be afraid of consuming media in Japanese without any English crutches (e.g English subtitles). I kept thinking “I’ll read this once I’ve pass the N2 exam!”, and I felt like I had to study and wasn’t allowed to enjoy myself with the language. Needless to say, this held me back!

I really, really wish I had tried reading manga and light novels sooner, instead of just buying them and letting them pile up.

When I started to read novels I felt frustrated at my lack of ability, but after pushing through I found my Japanese ability boosted with every new book!

Stepping away from studying with flashcards and textbook and teachers was scary and frustrating, but it was ultimately freeing. It was exactly what I needed to do to reach the advanced levels of Japanese.

Change your approach so you’re studying 30% of the time and consuming Japanese media (news, manga, books, TV, movies, etc.) for the other 70%.

Find material that you want to consume and that’s at a good level for you. It shouldn’t be too easy or too difficult. (Or it could be if that’s what you want.) Make sure you’re able to understand the overall meaning while also learning something new.

Ask people in the community and test read/watch to see if something’s a good level for you.

Starting out might feel frustrating at first, but your Japanese is sure to improve with every book/episode/movie you consume!

Some Japanese Novel and Anime Recommendations:

These are thing I’ve read, their difficult levels are based on my own judgement. I was also going to add manga, TV shows, and movies, but I have waaay too many manga recommendations and don’t watch enough TV/movies in Japanese.

君の膵臓を食べたい（きみのすいぞうをたべたい）(I Want to Eat Your Pancreas)

乙女ゲームの破滅フラグしかない悪役令嬢に転生してしまった… (My Next Life as a Villainess: All Routes Lead to Doom!)

なぜ？どうして？科学のお話 (Why? How? Science Stories)

女だから、とパーティを追放されたので伝説の魔女と最強タッグを組みました（Sexiled: My Sexist Party Leader Kicked Me Out, So I Teamed Up With a Mythical Sorceress!）

宇宙よりも遠い場所（そらよりもとおいばしょ）(A Place Father Than the Universe)