How to Read Japanese Newspapers

Being able to read Japanese newspapers is considered to be one goal for becoming “fluent” in Japanese. For some it might be a sign of fluency, for others a challenge, and perhaps a few just enjoy reading the news and keeping up-to-date with what’s going on in Japan.

This post looks at the difficulties of reading Japanese Newspapers and highlights things to keep an eye out for. As well as suggestions for further readings and other resources to help you become a Japanese newspaper master.

One magical tool which will be useful for reading the following post (and online newspapers) is Rikai-chan for Firefox and Rikai-kun for Chrome, which are apps you can use that, when turned on, will reveal the reading and English meaning of a kanji or kanji compound when you hover over them.

In the days when the internet wasn’t a thing there were these magical paper items called newspapers which were used to inform people of world and local news. However, every newspaper had limited space and a lot of news to report. This resulted in a phenomenon where quite often the articles are shortened by cutting out some kanji in certain compounds, and removing connecting expressions and particles.

So paper published newspapers are still very popular, but I brought up the point of the internet because, just like English language newspapers, the internet has had a huge impact on how Japanese news is published. As the internet doesn’t have a limited amount of space articles tend to be told with some of the missing verbs and particles missing from newspapers. NHK News is a good example as they not only avoid removing items from articles, they also avoid the common dictionary form, and instead try to use the politer teineigo (ます form). This makes NHK news articles a lot easier for novice news readers to get into.

This feeds into the above statement that newspapers like to remove particles and verbs from their articles, especially in the headlines. This is still the case even for online news articles.

The removal of verbs and particles from Japanese headlines is, I feel, very similar to how English news articles are written with snappy headlines to grab the readers attention.

Put in your orders with the ‘Spanish waiter’ (The Sun, a tabloid)

The Japanese do the same, give you enough information so you get an idea of the article, but not enough so you have to read the thing. While also cutting it down for space reasons

As you can probably tell from the Japanese headline, WALL OF KANJI. This is because, as mentioned, certain particles and verbs are removed, making them appear to be a single kanji compound. But that’s really not the case.

Items that are often removed/changed for headlines

i.e    台風１０号自動車並み速さで北上 ー＞  台風１０号が自動車並みの速さで北上している  (The Typhoon No.10 is moving northward at the speed of a bicycle)

Verbs and adjectives that come at the end of the sentence.

Verbs following を are left out (the を remains) 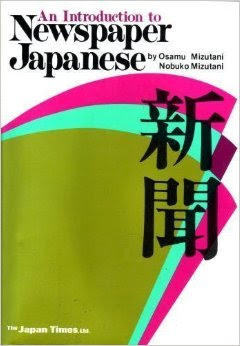 ‘へ’in a headline indicates that somebody is moving towards doing something, i.e. they haven’t done it yet, but are considering it or planning it.

i.e 大阪の送水トンネル 35年ぶり全面点検へ (For Osaka’s water supply tunnel, after a gap of 35 years, plans are being mooted for an inspection of the whole of the surface.)

To decipher these walls of kanji it’s really a matter of practice and learning kanji. You can use software such as the previously mention Rikai-kun and Rikai-chan (sorry I don’t know any others for other browsers). The best policy is to read it 2 kanji at a time. Most kanji compounds are no more than 2 kanji (or 2 kanji compounds merged into 4), and understanding the meaning becomes easier once you break down the headline or sentence into individual words.

It really is a matter of the more you read the easier it will become.

Newspaper Japanese – A newspaper vocabulary and kanji course, by J-Talk Online which was released today on Memrise!

NHK News – Easier and clearer than most newspapers, often with videos

“Reading Japanese Crime Articles” by Stephen Smith. (You can get a digital copy through itunes)

“An Introduction to Newspaper Japanese” by Osamu and Nobuko Mizutani of the Japan Times (published 1981, still relevant but might be hard to find), Amazon (US).

新聞で学ぶ日本語 (Shinbun De Manabu Nihongo) – Appears to be an updated version of  “An Introduction to Newspaper Japanese” as it is written by Osamu and Nobuko Mizutani. Can purchase this book through JP Books (UK), or Amazon (JP).