How to Use Manga to Study Japanese

A lot of us study Japanese because we want to be able to understand anime without subtitles or read manga in Japanese. Being able to do either of these is incredibly rewarding, but many beginners think you need to be ‘fluent’ or that you need to live in Japan for a certain number of years before you reach this level.

They convince themselves that being able to read manga is beyond their abilities, so why even try?!

Well, what if I told you it is possible to be able to understand manga a lot sooner than you thought?

Why Manga is Fantastic for Japanese

I often hear people say you shouldn’t learn Japanese from manga, but I say why not?!

Manga is written by Japanese for a Japanese audience. It’s rich in vocabulary, grammar and phrases, and fantastic for improving your reading comprehension.

You certainly don’t have to know advanced Japanese to be able to start reading manga.

You might not understand 100% of the manga you pick up, and that’s fine! It’s important to remember that you don’t have to understand all of the vocabulary and grammar. If you understand everything then you’re not learning anything new.

Reading manga in Japanese is fantastic for beginners because it gives you a visual aid to connect with the Japanese you’re reading. This means you can normally work out what unknown words and grammar patterns mean from context.

Understanding new things from context is a great way to learn and it helps your brain retain the information longer.

However, there are a few things to take into consideration when reading Japanese manga for the first time. Needless to say, you can’t pick up any old manga and start reading. Here’s why…

My First Time Reading Japanese Manga Was… a Disaster 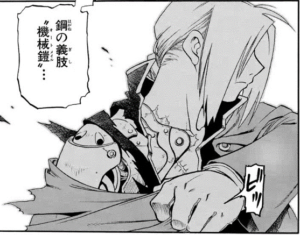 The first time I tried to read manga my Japanese level was roughly equivalent to beginner level (JLPT N5 or N4). The experience was… frustrating to say the least.

I had a copy of Fullmetal Alchemist, still one of my favorite manga of all time, and couldn’t even get past the first page!

So I picked up another manga, this time Vampire Knight, same issue.

Reading was slow. There was so much grammar and vocabulary I didn’t understand. I tried to learn them, but the words wouldn’t stick. I tried translating pages into English for myself, but this turned my brain into mush incredibly quickly.

It was a frustrating and demotivating experience. I wouldn’t touch manga in Japanese for several years after that.

However, I was eventually able to read manga and now I have a huge library of Japanese manga to enjoy and improve my Japanese with!

The factors that helped me read manga as a beginner were:

When I first picked up a volume of manga to read in Japanese I thought, “I can do this! I’ve been learning Japanese for two years!” But I failed… miserably.

What I didn’t take into consideration was the subject matter.

My first manga was Fullmetal Alchemist. A fantasy narrative with its own magic system based on chemistry and physics. Set in a world ravaged by war, where the characters discuss morality issues and philosophy.

Of course I wasn’t going to be able to understand this as a beginner. I’d only just learned the vocabulary for school, table, and bank. I knew the polite Japanese to talk about what I did over the weekend, not the moral issues behind human experimentation!

When you start learning Japanese you learn the very basic vocabulary, grammar, and kanji which builds up the core of the language. These beginning stages are incredibly important. They may seem simple and tedious to some (I’ve had people ask “when will I even use this?!”) but should never, ever, be skipped. When reading manga, a strong understanding of the basics goes a long way.

If you are a lower level Japanese learner you want to start with Japanese manga with a subject matter that matches what you’re learning.

This means slice of life, romance and drama narratives. Especially if they are based in schools or restaurant settings.

These stories and setting often use the more basic grammar structures and beginner’s vocabulary that you’ll be working on.

You could pick any slice of life or romance manga to read, but sometimes even these can still be difficult.

Take Nichijo for example. “Slice of life” is practically in the title of this manga. Yet the stories within this manga rely heavily on comedy.

Comedy can be incredibly difficult to understand, even for advanced learners! Not just because Japanese comedy uses a lot of word play, but because you often need to understand a certain aspect of Japanese culture to get the joke. You can read comedy manga if you want but watch out for puns.

Manga set in a working environment or about a subject you enjoy (like gaming) might seem like great places to start. However, these are often written for a more mature Japanese audience, which means no furigana, the readings written next to the kanji.

So even if the subject matter is slice of life or romance, if you don’t know enough kanji you’re going to struggle when reading it.

Double check that the manga you choose is aimed at a younger audience and has the furigana. If you’re at a more advanced level, then pick up manga for mature readers. It’s still a great way to boost your kanji reading abilities.

Find manga that will interest you, but that’s also aimed at a younger audience.

Some great manga to start with include Yotsuba&!, Mitsuboshi Colors, Cardcaptor Sakura and Ore Monogatari. As well as the majority of Shoujo manga published by Hana to Yume or Margaret Comics.

It certainly helps to have a basic grasp of the Japanese language to understand most of manga. However, you don’t need to know advanced Japanese before can you start reading manga.

Often people think “I need to be fluent before I can do this”, but that’s really not the case.

The Pareto principle (also known as the 20/80 rule) is the idea that you can get 80% of the effect from 20% of the effort. In other words, you only need to learn the core 20% of Japanese to understand it 80% of the time.

In terms of manga, this means that all you need is a beginner’s understanding of Japanese before you dive into manga.

If you’d like a solid number then I say roughly 700-1800 vocabulary (which covers JLPT N5 to N4 levels) gives you a good basis to start with.

However, one thing that often isn’t taught to beginners is the colloquial grammar that often turns up in manga.

When you start to learn Japanese you’ll usually start with the です desu / ますmasu way of speaking. This is a neutral tense that enables polite conversation with a variety of audiences. Desu/masu will still appear in manga, so it’s important to learn this form.

However, as many manga focuses on a variety of true-to-life relationships, informal and colloquial Japanese is frequently used as well. 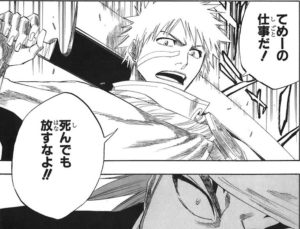 Once you’ve studied formal grammar you will probably move onto informal grammar that can be used in casual conversations. This would be る (ru) and う (u) verbs and their conjugations. These are also incredibly important for being able to understand and form complex grammar in the future.

It’s not until you hit lower-intermediate Japanese (JLPT N3 level), however, that you start to learn colloquial grammar. This grammar is even more informal than informal grammar. It’s grammar that you wouldn’t use in the majority of day-to-day Japanese conversations but is grammar you will come across in anime and manga.

(Note: you can use colloquial grammar among very close friends but shouldn’t with strangers or someone you’ve just met.)

Even if you’ve learned, or are learning, beginner grammar, it will help your manga comprehension to look at more informal and colloquial grammar that can be found in JLPT N3 materials.

Japanese Grammar Guide by Tae Kim is a great resource for learning about the core beginner’s grammar that is covered in JLPT N5 and N4. Tae Kim also talks a little about casual Japanese here.

Many people studying Japanese get to a point where they feel they need to be studying. Often this means sacrificing something they enjoy in exchange for studying, such as novels and video games.

You don’t have to study 100% of the time to reap the benefits of becoming good at Japanese. In fact, only studying can have a long-term negative impact on your Japanese abilities.

The reason why people start studying Japanese varies, however the majority of people’s goals are so they can use the language in some capacity or another. That’s the key: using Japanese.

When you use your Japanese you’re actively exercising your brain and reinforcing the neuron connections that associate Japanese words, grammar, and kanji with meaning. This is why composing your own sentences or essays in Japanese is also a great way to reinforce long-term memory.

This works for manga as well. By combining the use of manga with your studying you’re reinforcing the knowledge you were studying and increasing your reading comprehension.

Forcing yourself to read manga for study purposes doesn’t work either. If you force yourself then you’ll probably find you don’t enjoy it as much. Which means you’re more likely to drop it.

Choosing manga that interests you also makes it enjoyable. This means you’re more likely to pick up manga every day to read, which means regular exposure to Japanese!

Regular exposure and use of Japanese will help boost your Japanese skills immensely compared to studying it just once a week.

Remember: regular study is still key to pushing yourself to learn more. Use manga to relax from rigorous study while reaping the benefits of your hard work.

How to Use Manga to Study Japanese

One method for using manga to study Japanese is to look up words and grammar you don’t know. Then add them to a flashcard app or make your own paper flashcards.

Adding those words, kanji, or grammar to a spaced repetition app is a great way to further combine reading with studying. Be selective with what you pick, though.

Adding 5-10 new items to learn can be a lot more effective than 20+ because it’s easier to get through a few on a regular basis. You will then see these terms pop up again as you read your manga.

Another method is to avoid looking up words and grammar as you’re reading altogether.

Stopping constantly to pick up your dictionary or the internet to check something disrupts your flow. It can also make you too reliant on dictionaries, as well as start to turn reading manga into a chore.

Read a chapter without looking up anything. Then if you want to get more out of your manga you can read through the chapter again. It could be right after you’ve read it, the next day, or after you’ve read the whole volume.

You might find that you understood some things you didn’t the first time. These could be words, grammar, kanji or concepts. Re-reading and expanding on your understanding from the first read will help keep that Japanese in your long-term memory compared to looking it up in a dictionary.

Remember: If reading manga starts to feel like a chore, then take out the study aspect and just focus on enjoying what you’re reading.

Manga is a great tool to improve your Japanese abilities.

Make sure you read manga that is a good level for you, that covers topics you’ve already studied, and that you enjoy. This helps turn using Japanese into something that’s enjoyable, which makes it a great supplement for study and helps you learn Japanese faster.

At the end of the day the most important thing to remember when using manga to study Japanese is to have fun!