Growing up in America, I always felt like I was missing something.

I would never know how to describe myself. I would have adults describe my character but I would always question why they thought of me in that way. What made me a nice person? What made me smart?

When I finally learned about Japan and researched about the country, its people and its culture, I finally knew who I wanted to be. I respect so many aspects from Japanese culture and fused it into my life.

If you are looking for a positive, emotional change in your life I suggest studying Japanese culture. Japan is a country of many values and has a lot of ideas to offer.

If you read articles on Japan you may come across one that describes Tokyo as a busy, rushed city. These articles are not lying but there’s patience within the busiest city in Japan.

You will see queues everywhere in Japan, like at restaurants or stores. The Japanese have no problem waiting in line.

I value their patience as it lets me know the place is worth the wait. Even when eating on a rushed schedule they make sure to find the time to sit down and have a meal.

So when I have friends who complain about a 30 minute wait at a restaurant I like to think back on Japan’s concept of patience.

This is probably the most important value in the Japanese culture: The Japanese think of society as a whole. They tend to think of others before themselves.

Why? Making too much noise in a public area would be an inconvenience and a bother to other people.

Another example of respect in Japan when considering others is thinking before you speak. I’m sure many of us, including myself, have come across this notion before.

In Japan this is practiced often, as what you say may affect another person.

This means you’ll probably be holding back your true feelings but you’ll be able to know that the other person won’t be hurt by what you said.

In our everyday lives we probably take a lot of things for granted such as our food, family and friends.

We can learn a lot from Japan, as they are very thankful for all the things they have.

In Japanese there are many ways to say thank you to someone from a very formal way to casual. The standard way to thank someone in Japanese is arigato gozaimasu (ありがとうございます).

There’s even a way to say thank you for your food before and after the meal, itadakimasu (いただきます) and gochisousamadeshita (ごちそうさまでした).

You’re not only thanking the people who served and cooked your food when you say these words, but you are thanking the sun for growing the crops and the farmers who harvested those crops.

You are thanking all the factors that went into making you meal.

You’ll experience the Japanese hard-working spirit from the point of view of a customer when in Japan.

It’s a very admirable trait and a refreshing thing to experience, especially when coming from America or any other country that’s similar.

No matter what kind of day they are having or what is going on in their personal lives, the workers in Japan perform their tasks at work with a smile.

Their number one priority is you, the customer. It is their job to make sure you’ve had a great experience.

You can find this easily at any food related place whether it’s a fast food chain or a fancy restaurant. The Japanese don’t expect anything from the customer in return because that is their job and it is what is expected of them.

This value of being hard-working is very inspiring to someone who is used to people at work trying to get away with the bare minimum.

These values in the Japanese culture is what I strive for myself.

Not only do practicing these values make me feel like a better version of myself but it helps me understand Japanese people better. It’s not always about having to speak the same language.

Sometimes it’s better to express yourself with actions than with words when communicating in Japan. 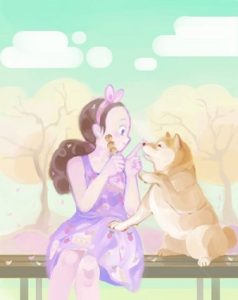 Hi! My name is Jennifer, I live in Louisiana. My interest in Japan started in middle school with anime and manga, but has grown deeper through high school and college with its culture, lifestyle and language.

I went on a 5-week study abroad program to Japan with my college and had a great experience.

Since then, I’ve visited Japan more times with my husband and friends. I’ve found a way to share my experiences, knowledge and love of Japan with my blog, Japan Therapy.

My blog first started as therapy for myself since my living situation didn’t allow me to move to Japan, but then it grew into teaching people about all aspects of Japanese culture.

My goal is to educate people about Japan and to give people a new perspective on Japan. I will be publishing a Japan travel planner/guide in the near future in order to help more people explore Japan.