Apologise for the late post but I’m in Tokyo on a business trip and it’s been non-stop for almost a week. Being out here though, is reminding me of some useful Japanese, especially restaurants in Japan.

So this week is about food in Japan when you go to visit and useful vocabulary and phrases to use when going to a restaurant (which will all be on Memrise as well). Although I realised that this was quite a large topic, so it will be split into 2 posts with this one about restaurants and the next about useful Japanese phrases which will be posted on Saturday.

Cultural Differences in Restaurants in Japan

Because houses are small in the cities and towns people don’t tend to get invited round each others houses for food. This means that eating out is done on a regular basis and restaurants, cafes and bars are serious business.

When you go to a restaurant in Japan it will probably a certain type of restaurant that will only sell foods of that type rather than in the West which tends to have a wide variety of food. Although that doesn’t mean there won’t be a lot to choose from on the menu.

For example, if you went to a Western style Italian restaurant your choice would be from a range of pastas and pizzas. These are kinds of restaurants you’ll find, what they have and what to expect when looking for them:

So what is cheap or expensive is a matter of opinion (if you come from America you might think all the food is expensive in Japan), but you’ll find the cheaper ones will have displays of plastic versions of their dishes out the front and/or menus with images and the prices. The most expensive the restaurant the less you’ll see and the more likely everything on the menu will not have images and will be in kanji.

Depending on the restaurant one of a number of things might happen. The first is that the waitress/waiter will either be keeping an eye on you and jump forward when you’re ready to order. Otherwise you can just call out “sumimasen!” to get their attention. In some Japanese bars, family restaurants and other places there will be a button you can press to call for service when you want to order something or ask a question.

Sometimes you don’t order from a paper menu but a ticket machine at the front of the restaurant. These are normally entirely in Japanese so it helps to learn the hiragana and katakana for these. Otherwise there will often be all the items on the menu outside which you can use to choose what you want and either indicate to the server or copy the symbols to select it on the machine. Either way you will often have to put the money into the machine before you select something and then make your choice. A ticket will come out along with your change and you give the ticket to the server who takes one half away to the kitchen before bringing you your order.

Unlike America, Japanese waiters don’t check on you every five seconds to see if everything’s ok. People go to enjoy the food and the company they’re with and don’t want to be bothered unless they’ve called for the waiter.

You don’t pay at the table in Japan and you do not tip! Tipping is seen more as an insult saying that you feel like the restaurant or server needs the extra money. I like it that people get paid for the job they do and there’s no pressure on the customer to subsidise their wage like they do in America.

Paying is done by taking the bill to the register at the front of the restaurant and paying.

Water or tea will be brought to you by your server when you arrive, or there will be an area where you can serve yourself more. If you run out the server will re-fill your cup. And it’s free!

If you are a coeliac/gluton intolerant please be careful of wheat tea (mugi cha) which is served at some restaurants. It’s brown in colour and if you are unsure you should ask the server or just ask for water.

Space is limited in the cities and towns, which means the restaurants are often small and cramped with small tables an bars. So don’t be surprised if there are times you’re sitting very close to a stranger. Despite this, however, the Japanese have developed a way to not invade each other’s personal space even when cramped together (unless they can’t help it like on a crowded train or bus).
Family restaurants tend to have larger tables and booths.

Warning! Smoking indoors and in restaurants are permitted in Japan! There are sometimes specific areas for smokers but often these will still be open to the rest of the area. If you were to go to a bar or small traditional restaurant most people will probably be smoking and there won’t be any separated areas.

Restaurants and Food in Japan

Family restaurants are often chain stores that come in a wide variety that are often western style but sell foods with a Japanese twist to them. Like hamburgers that don’t have buns and are covered in a Japanese sauce with a side of salad, and chips/fries are ordered separately. Family restaurants are more likely to sell a variety of foods compared to other restaurants and are often reasonably priced. Water is free and when you order a drink it’s often self serving from a drinks corner. If you’re unsure either ask the waitress or watch other people and copy what they do. 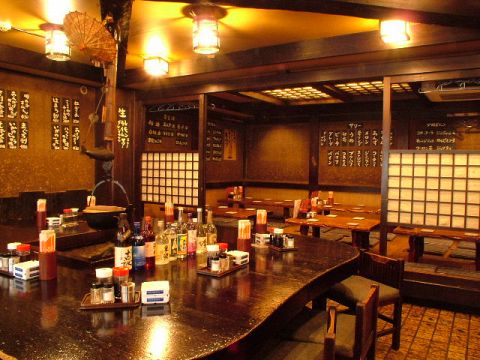 Izakaya is a type of Japanese bar where the tables are low to the ground and you sit on cushions on the floor. You’ll often have to take your shoes off at the entrance and put them into lockers or next to the area you’re sitting in if that’s the case. Otherwise there are a few where you sit at tables like normal.

At these bars people will order drinks as well as a variety of foods to share between them. This can build up in cost fairly easily, especially as people get more and more drunk, so be careful if you’re going out with friends to one of these.

Cafes are pretty much similar to cafes in the west and will serve teas, coffees and possibly small cakes and other sweets. They’re good for a sit down but not if you need a decent sized lunch. Smoking is often permitted.

Donburi is one of my favourite dishes in Japan, it means a large bowl that has rice on the bottom and something else on top. If you go to a donburi restaurant your options will often be things like tendon (rice with tempura ontop) and katsudon (fried pork cutlet cooked with egg and sweet soy sauce).

I separate gyuudon (which is thinly sliced beef boiled in a sweet soy sauce ontop of rice) because you often get restaurants that sell just this. Like the chain Sukiya which is amaaaaazing~

Tempura restaurants sells only lightly deep fried vegetables and fish with rice and soup, but in different ways. I.e with tendon (tempura ontop of a bowl of rice), or on a straw plate with the rice and miso soup separate.

Tonkatsu is often referred to the deep fried pork cutlet but it also includes a croquette with various fillings like potato, cheese and vegetables. They are normally served with a bowl of shredded cabbage, steamed rice and miso soup.

Often at these restaurants the rice and cabbage come with free re-fills (it’ll say somewhere in Japanese), so be careful not to order too much tonkatsu because the entire meal can fill you up very quickly.

Okonomiyaki means “as you like it cooked” and is batter mixed with cabbage, and cooked on a hot plate with what ever you want! Squid, prawns, beef, pork, cheese, mochi, sweetcorn, or even a mix of a bunch of stuff.

When it’s cooked you normally have the option to add okonomiyaki sauce to the top with sea week flakes, mayonnaise and dried fish flakes. I really do think it’s the sauces ontop that make this dish one of my favourites.

You might come across Hiroshima style okonomiyaki which also comes with fried noodles underneath the okonomiyaki.

Okonomiyaki restaurants will either serve them cooked in the kitchen, or give you the option to cook them yourself on a small hotplate on the table.

Omelette and rice mixed together to make omurice! Omurice is friced rice cooked with onion, possibly other vegetables and a sauce like ketchup or something. It is then covered in and omelette and served in the same sauce it’s cooked with. This might seem like a really strange dish but it’s really good!

Restaurants with omurice will often be cafes and is more of a lunch time dish.

Udon and soba are both noodles which are served in a soup sometimes with vegetables, seaweed, fried tofu, and meat. Udon is the thicker meatier noodle and soba is thin buckwheat. These two are often together in the same restaurant because they’re so similar. Often they’re a quick, plain dish when you need something to fill you up for lunch.

This is probably one of the most famous dishes outside and inside Japan. Different areas in Japan make different types of ramen and if you cannot afford to travel all across Japan you might be able to find a ramen hiroba (ramen hall) which serves different ramen types from across Japan.

Similar to soba and udon it is a noodle served in a broth with vegetables and meat but a lot less plain than soba and udon. The broths will often be beef, pork or fish so if you are a vegetarian thinking this is a good option it often won’t be unless you don’t mind the taste of meat.

My favourite is a ramen from Chiba which has a white creamy broth that’s not really cream, or tonkotsu ramen which is famous in Fukuoka and is made from a pork bone broth.

Everyone interested in Japan knows what sushi is. However, there is the assumption that sushi refers to raw fish (which is actually called sashimi) and in fact sushi refers to the rice which is mixed with a Japanese vinegar before serving. Sushi comes in various types from the typical image of raw fish ontop of rice, to rolled up ones in seaweed. Some restaurants will even offer ‘western’ flavours including hamburger and bacon sushi.

Sushi restaurants will either be sitting at a table and ordering types, or kaitenzushi (sushi-go-rounds). I find the sushi-go-rounds tend to be a bit cheaper, especially if it’s a chain store which sells 2 pieces of sushi on a plate for 105yen! (I think it might be 108yen now consumption tax has increased). They will also often have screens as well as the sushi-go-rounds where you can order specific sushi you want, and will have the option of having it without wasabi (which otherwise most plates will have as default).

Be careful of sit down sushi places that don’t have clear prices. These will be more expensive.

There are a few places/foods and things I’ve missed off this list but if you are after reasonably priced good foods to try out in Japan then these are the types of places you will expect to find! Others (like unagi – eel) tend to be more expensive and so I tend to avoid them and so don’t have much personal experience I can share with you about them. Hence why I haven’t included them.

Also, there is a great guide to Japanese restaurants on Japan Guide if you are more interested in rough costs and restaurants besides Japanese style.