There are a plethora of English translations of Japanese novels and out there. But is reading translations a good way to study Japanese? Can you learn Japanese effectively through translation?

This article looks at some methods for studying Japanese through translation, and discusses if it’s an effective way to learn Japanese.

Techniques for Studying Japanese Through Translation

For this I tested these techniques on two books, If Cats Disappeared From the World and All You Need Is Kill.

If Cats Disappeared From the World is a novel about a man who makes a deal with the devil to extend his life in exchange for disappearing things from the world. It’s a relatively easy book that’s good for JLPT N3 level.

All You Need Is Kill is a sci-fi novel about a man who keeps re-living the same 30 hours. But this is no Groundhog Day; he’s in the middle of a war with aliens and he’s very tired of being killed over and over again. This is a little more of a challenge and good for people who have studied some JLPT N2 Japanese. 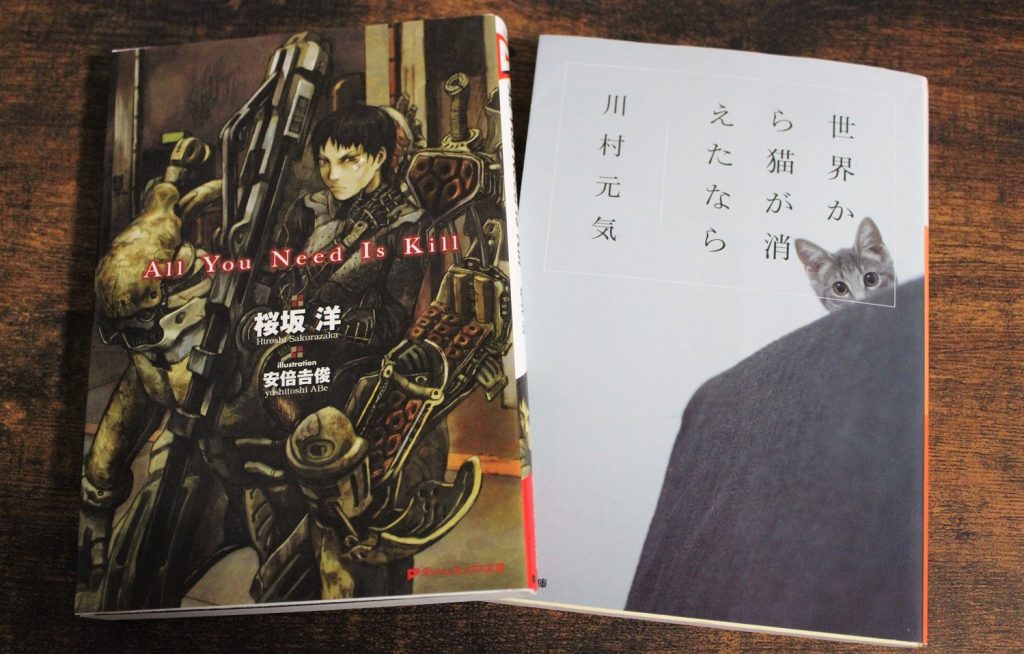 This stood out to me with the first line of All You Need Is Kill. Which in Japanese is 「戦闘開始から十分間、兵士は恐怖に溺れる。」and in English is “When the bullets start flying, it’s only a matter of time before fear catches up with a soldier.” This is an accurate translation of the feeling of the original. However it does make it difficult to use as a study tool. Or does it?

Just because an English translation isn’t one-to-one in terms of the wording used, doesn’t mean it can’t be useful as a study tool…

For each of these method I highly recommend using the following steps:

If you read the English before the Japanese it means your brains doesn’t have to work as hard to remember meanings of words. This might give you a false sense that you know something without fully memorizing it.

You can’t really read a translation alongside the Japanese on a word-by-word level. This is partially because (as mentioned above) there isn’t a one-to-one direct translation of Japanese to English that doesn’t sound awful.

The order of words in Japanese and English grammar is also swapped and if you don’t know the Japanese word already it would be hard to pick out of an English sentence without more context. You need to start on the sentence level.

Let’s go through the above techniques with If Cats Disappeared From the World.

As mentioned in the above All You Need Is Kill example, this might be a little tricky when the translation does not use the exact same wording. However, when you have a translation like this it can still a good exercise.

戦闘開始から十分間、兵士は恐怖に溺れる。
“When the bullets start flying, it’s only a matter of time before fear catches up with a soldier.”

What words are missing from the English? What are the verbs used in the Japanese?

If anything, what’s not there makes you focus on the original Japanese a little more. It turns into a game of how is this different? (As I mentioned, this isn’t wrong it’s just makes it a little more difficult to use as a language study tool.)

I had originally tried to test this as “paragraph-by-paragraph” but a lot of Japanese novels have a single sentence in their paragraphs.

This method leaves it to your best judgement; read anything from a few lines or a page before comparing the Japanese to the English. Try not to read too much so you forget what you’ve read, but not too little so you have a better grasp of the context.

If Cats Disappeared From the World is a great book for this as it has nicely sized sections which can be broken up. Such as this first part of chapter 1:

I feel like this is a better pace because you can focus on wider context rather than becoming too focused on individual sentences.

Chapter by chapter is really great when you want to enjoy a book without getting too bogged down on constantly stopping and starting to check the Japanese. It’s great for training you in general context comprehension rather than individual words.

You could either read the entire English chapter after the Japanese or you could just skim the English to grab an idea of context. This is particular useful if there were segments that you were confused by.

If you are particularly struggling with how events flow in a chapter you could even read the Japanese again after checking the English. You might be really bored by the story at this point, but it’s a good way to solidify the Japanese in your brain.

Studying Japanese Through Translation, Is It Worth It?

I think this can be a useful exercise but it’s very time consuming. Time consuming exercises can have the reverse effect of demotivating you. (Or at least they demotivate me!)

I also think just reading the Japanese novel and checking the English if you’re confused is a lot more effective than checking every single line. Especially when a translation uses different wording from the original Japanese.

But if you try it and find it helps boost your Japanese language abilities, then do it!