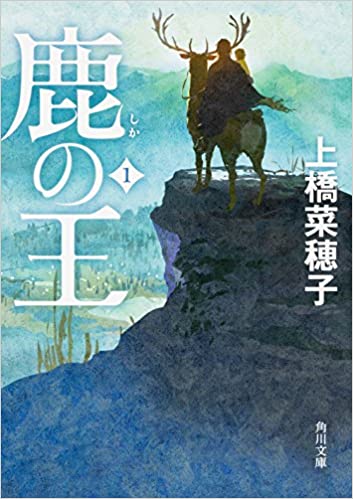 A group of warriors, The Lonely Horns, take on the role of death soldiers to protect their homeland from the invading Tsuoru Empire. Their leader, Vaan, who already lost his wife and child to illness, is captured and made a slave in the salt mines. One night the salt mines are attacked by a pack of strange dogs, causing an outbreak of a mysterious sickness. Vaan is one of the only survivors, along with a young girl Yuna, who decides to raise. As the two lone survivors father and child must confront a never before seen crisis!

Why You Should Read 鹿の王 (The Deer King)

If you’re a fan of high fantasy, then this is the novel for you.

鹿の王 (Shika no Ou) is one of the incredibly rare well written, original high fantasy novels to come out in Japan. I don’t mean ノベル, I mean 小説, a story that was not released online or in a magazine, but direct to novelization with a solid plot with a start, middle, and end. One with amazing characters and world building.

It won the 本屋大賞 in 2015, sold over 2.3 million copies, and has an anime movie coming out in September.

The story follows two protagonists, Vaan and Hossaru. Vaan was a deer rider and warrior until an invading army killed everyone he knew and loved and made him a slave in the salt mines. Hossaru is a doctor close to the royal family of said invading country who took over Vaan’s homeland.

An illness breaks out in the salt mines after an assault by wild dogs, and Vaan and a little girl are the only survivors. When these dogs spread the illness elsewhere it’s up to Hossaru to find a cure.

There’s adventure and magic, but also natural science and politics. The book comments on human nature and society, as well as the perspective of medicine from a medievalesque setting.

The story is a decent length too, spanning over two hardback books or four paperback. (Japanese publishers don’t like publishing long books which is why you often see stories split into multiple volumes.) This makes it almost 1200 pages long!

If you are interested in this story, then I would strongly suggest reading all the books in one go. This is simply because of the unique names and terms, the complexity of events, and the difficulty of the Japanese.

Why Japanese Learners Should Read 鹿の王 (The Deer King)

鹿の王 (Shika no Ou) is the most challenging Japanese novel I’ve ever read.

I read the first hardback novel two years but felt frustrated by how little I felt I understood. With the movie coming out in September I decided to re-read this series (and actually finish it!) and was pleasantly surprised by how better I understood events and the overall plot! My novel reading experience and N1 studies over the last two years helped a lot.

However, I still struggled to remember the strange unique names and terms. So, I switched to the Tsubasa Bunko edition, which made reading this novel and absorbing the story a lot smoother.

As high fantasy this novel not only uses advanced N1 level grammar, but also obscure Japanese words, kanji, and phrases. This gives it a great fantasy feel akin to Lord of the Rings, though.

Any new JLPT N2 or N1 words of kanji do come with furigana the first time, but they don’t appear again unless it’s been a while since the previous instance of the term. This makes it great for forcing you to memorize the advanced and fantasy-based kanji and vocabulary.

A large chunk of this novel also talks about medicine and discusses topics akin to pandemics, immune systems, and vaccinations. (Somewhat topical considering the current situation in the world.) Medical Japanese is not something you tend to come across in everyday life (unless you’ve studied for the JLPT N1, but even then, medicine is a rare topic.) Hossaru’s story is also a lot more political and has more scenes with talking, whereas Vaan has more action scenes. This makes the Hossaru storyline a lot more difficult to understand than the Vaan storyline.

Kanji and vocabulary aside, grammar can be a big stickler for some learners. The fantasy feel is portrayed mostly through the grammar used, which means lots of classical Japanese structures and lots of keigo. In other words, a lot of JLPT N1 grammar pops up.

There are also characters with strong accents (such as the little girl, Yuna) which can make what they’re saying difficult to understand. I don’t mean Osaka-ben, but made-up inflections and dialects that impact how different characters talk.

The other challenge is with names and unique terms. There are unique places, people, objects, animals, illnesses, and cultural terms which are all made up for this world. Some use katakana, others are written in kanji with unique katakana readings. But it’s so incredibly easy to get lost with who’s who and what’s what. (Unless you have a great memory, which I don’t!)

These unique terms were why I decided to read this story using the both the Kadokawa edition and the Tsubasa Bunko edition!

Without the worry of getting stuck on obscure kanji readings and unique terms I was able to increase my reading speed and focus more on the story than on the words.

Sometimes I had to look a difficult fantasy word up, but the furigana made this even easier, especially when an obscure kanji was used! (I ended up collecting roughly 300 new terms by the end of my read.)

I would also sometimes use the obi or a piece of paper to hide the furigana so I could practice reading the kanji. But I often found myself so engrossed in the story that I completely forgot to do this. – I had, however, mostly intended to focus on enjoying the story rather than using it as a study tool, so I didn’t care that much about practicing kanji.

The Tsubasa Bunko edition doesn’t dumb down the language though. You still get the same advanced grammar, obscure words, and difficult to remember names as the Kadokawa edition.

You can read a taster with the first 50-ish pages of the Kadokawa and Tsubasa Bunko editions here:

鹿の王 (Shika no Ou) is the most challenging Japanese novel I’ve ever read, but it’s also one of the best fantasy novels I’ve ever read, in English and Japanese. I’m really glad I was able to come back to it and understand it a lot better this time!

I really, really enjoyed this story a lot more when I allowed myself to…well, enjoy it. As soon as I didn’t need to worry about memorizing every single new word or kanji (and using the Tsubasa Bunko edition to help with this), I had a lot of fun getting lost in the world.

If you’re interested in the story but can’t read the original Japanese right now, then don’t worry because English editions are on the way! The Deer King novel, translated by Cathy Hirano (who has translated other Nahoko Uehashi novels), is currently in the works, although I’m not sure when it will be released. And the movie comes out in Japan in September, but again, not sure about English speaking countries. But still, they’re coming!