There are a lot of Japanese words that pop up regularly in anime and we are going to practice some of these using anime themselves starting with “this/there/where”.

In Japanese how you say “this” or “that” depends on where you are in relation to the listener.

KO- is used to indicate that you are talking about something close to the speaker. The following 3 are very common uses of this found in anime and everyday life. 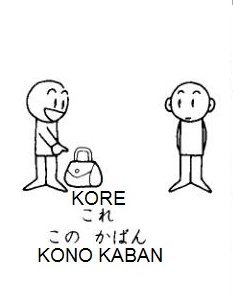 KORE – means “this” when you are not mentioning the subject. Such as in the picture on the right indicated to the bag, but without saying “bag” it’s just KORE.

KONO – also means “this” but is used when you talk about the subject such as KONO PEN “this pen”. Or as you can see in the picture KONO KABAN “this bag”

The following you will hear more in anime than in everyday life simply because it is very informal Japanese.

KONNA – an informal form of KONO, such as KONNA KOTO is used a lot which means “this thing” or KONNA OOKI “this big”. KONNA can also be used in a similar way to KOU IU and can mean “this kind of” and is sometime interchangeable.

SO- is used to indicate something near the listener. This uses the same pattern as above but replaces KO with SO. 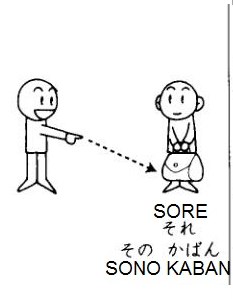 SORE – “that” indicating to something unspecified near the speaker. Once again if you look to the image on the right the speaker is pointing to the bag in the listeners hand and saying SORE.

SONO – “that” indicating something specified near the speaker such as SONO PEN “that pen”. Or SONO KABAN which means “that bag”.

SOKO – “there” indicating somewhere near the listener.

Again these are the same for KOU IU and KONNA but with SO used instead: 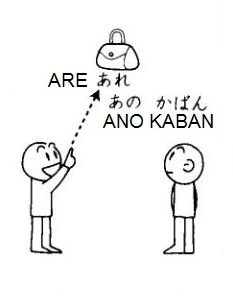 ARE – pronounce “A” “RE” and not “are” (as in “arr”) and means “that” but is used to indicated something that’s near neither the listener or the speaker.

ANO – “that” (over there) near neither the listener or speaker. Such as ANO PEN “that pen” or ANO KABAN “that bag”.

You might hear in anime people say “ANOoo…” a lot, in cases where the O is extended ANO doesn’t mean “that” but actually “errrrmmm” or “errrr” or “excuse me but…”.

ASOKO – this one is slightly different and uses ASOKO rather than AKO (which used to be used but not any more).

A- doesn’t apply to the KONNA/KOU IU items because in anime these are mostly used when talking about themselves or someone else rather than something really far away. If a character were referring to someone to something someone did who is not near them they would use SONNA or SOU IU.

It’s important to remember that because anime uses informal Japanese the grammatical rules you learn early on in Japanese get bent a lot.

DO is used to ask a question and can be used when referring to something near the speaker, listener or either.

DOKO – “where” – A common phrase used in anime is KOKO, DOKO? which is often translated to “where am I?” but actually means “here, where?”

DOU IU – mostly heard in anime as DOU IU KOTO which often gets translated as “what is the meaning of this” but literally translates to “what kind of thing?” (KOTO meaning “thing someone is doing”)

DONNA – again refers to “what kind of” or “which”.

The following video is a scene from Ano Natsu de Matteru where the main character Kirito sees the main female character Ichika fishing in a river and decides to see what she’s doing. This is the first time the two characters meet.

This scene has a wide mix of the above words. See if you can hear where the words are being said and make a note of which ones. There are 8 in total and some repeat so you may need to listen to it a number of times. To see the answers and the English translation of words just select the subtitles/CC option at the bottom of the video (may have to go to YouTube to view the subtitles option).

Japanese – Where to Start II

One thought on “Anime Japanese – This, There, Where?”