Japanese grammar is actually surprisingly easy once you get it. Basic grammar is at least. It’s like a maths problem; + x – etc., all have their own uses and places, it’s the numbers around them that change the meaning of the formula.

In Japanese these are called “particles”. They are set sounds that have set uses. Once you know the basic ones it’s very easy to create a wide variety of sentences by changing the words.

How To Practice Making Sentences

I wanted to write this first because I feel it’s one of the most important things about this article.

The following begins to give you the building blocks to make very simple sentences. What you need to do to learn them is:

Every Sentence Without a Verb ends with “Desu”

Whenever you have a simple sentence that does not have a verb it will end in です “desu” (formal) or だ “da” (informal).

(There is a complicated historical reasoning behind “desu”. But I like to think of it as a period or full stop, that marks the end of the sentence when there is no verb.)

You can elaborate on these by adding an adjective in front of the noun/object.

There are 2 types of adjectives. い (i) adjectives and な (na) adjectives. You don’t need to worry about those right now but you can click here to learn more about them and where you can learn them for free.

Just like in English you can also drop the object and just have the adjective in the sentence.

*(Note: na adjectives have a “na” before a noun, but this “na” gets removed when not in front of a noun. I.e a beautiful idiot. = kireina baka desu / it’s beautiful. = kirei desu) 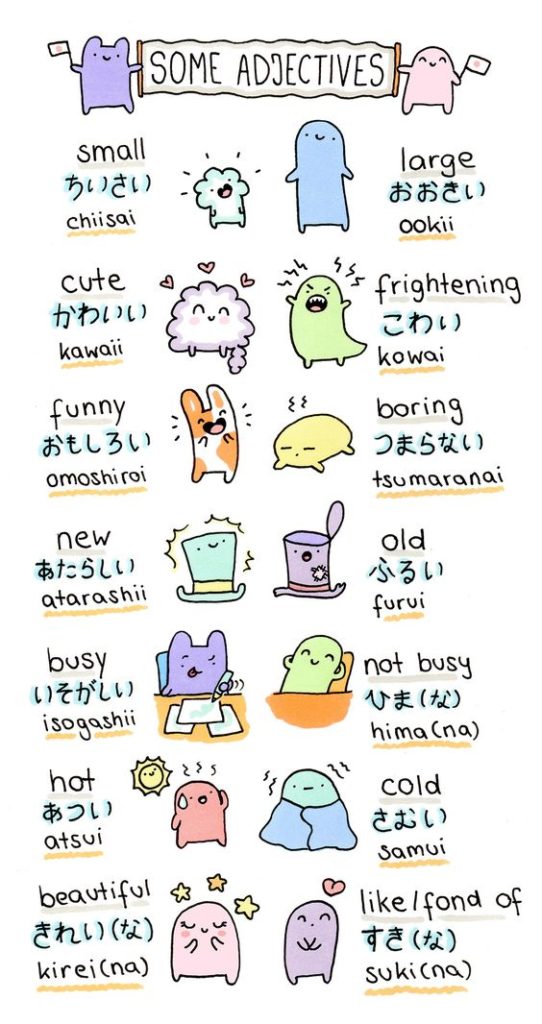 Talking About a Topic with “wa”

The topic of the sentence will be at the start and is marked with は “wa” (but written with the character for ha).

Similar to English you can also use this to swap the adjective with the object. So instead of saying “cold apple” you can say “the apple is cold”. (In this case you can see that the noun becomes the topic.)

“information wa” is information you don’t need in a sentence. I.e watashi wa Sam desu = I am Sam. If you’ve already established that you’re talking about “watashi wa”, you can drop that part of the sentence.

“information ga” is information you do need. I.e Sam ga suki desu = I like Sam. This sentence wouldn’t make sense if you dropped “Sam ga”.

Making a Sentence with Verbs

If you are studying with a teacher from a workbook you will probably learn “masu” form. This is because they are very easy to use and easy to change into past, negative and past negative. (You can click here for a more detailed look at how “masu” verbs change)

If you are studying online through Memrise or Tae Kim’s Guide to Grammar then you will probably learn the “plain” form. (You can click here for a more detailed look at plain verbs and how they change)

But right now the most important thing you need to know is 2 things:

There are 2 more particles I’d like to introduce to you. The first is を “o” (sometimes spelled “wo”) and is used with objects/nouns. With “o” you can do things to an object with a verb.

The second is に “ni” and is used when you’re talking about places. I.e here, there, specific places, etc.

Did You Notice the Lack of “I”?

There is one final important thing I want to point out in Japanese sentences. This is because so many people new to Japanese make this mistake.

In English we say “I” in sentences a lot. Look at the above sentences where I go to the bank, I go home, I eat an apple, etc., but the Japanese does not use I in the same way we do.

You may know that “I” in Japanese is “watashi”, but constantly saying “watashi wa…” in every sentence sounds weird. In Japanese if you (or the person you’re speaking to) has already established who you’re talking about (i.e yourself), you do not need to use the topic (watashi) over and over. You often don’t need to use it at all!

Just like in the above sentences, it is often clear from the context that you are talking about “watashi” and therefore do not need to use it.

I hope this was helpful! Feel free to post on the Japanese Talk Online Facebook Page sentences you’d like to try out and get corrected, or if you have any questions!

If you’d like to learn more about Particles I strongly suggest buying All About Particles: A Handbook of Japanese Function Words. It’s cheap and easy to use. It goes through every kind of particle used in Japanese with example sentences using kanji and romaji and English!!

Nyaa and Other Japanese Animal Sounds