I must chose to lose something if I am to live.

How would the world change if chocolate vanished? If phones vanished? Movies? Clocks? Me? What would people gain and what would they lose? A 30-year-old postman asks. There not much time left to live. But the cheerful Devil grants me one more day to live in exchange for something else around me. An incredibly strange seven days with me, my cat, and this carefree Devil begins… Value is create when something is removed. You don’t know how important something is until it’s gone.

Why You Should Read 世界から猫が消えたなら (If Cats Disappeared from the World)

This is a critically acclaimed novel in Japan which has a movie, manga, audio book, and radio show.

It’s a surprisingly emotional story where you find yourself questioning what you value in life.

The author described this as a modern fairytale, to teach morals to modern society, which I think he does but in a way that’s aimed at Japanese society. Critical thinking about the world, morality, and values is so engrained in stories and education in the West, that some reader might find the questions asked in this novel quite shallow.

However, when reading them in Japanese I found myself re-considering how much time I was spending on my phone and social media, and how I could use that time to read books and learn new things.

However, this book is still written for native Japanese people, so there is also some more advanced level vocabulary and kanji. But thanks to contexts it’s easy to guess what these words are and a great learning tool to see them used in a natural way. This give most readers a good challenge while not being overwhelmed with too much advanced Japanese.

One of the trickiest parts of this novel might actually be the cultural references. Then again, most of them are commonly known references in English and Japanese, so I think the majority of people will get them if they’re interested in Japan and American movies. (Which I think most people who study Japanese are.)

There is also an English translation of the book. Although most people seem to struggle with the writing in the novel (and despite the US version changing a lot of the references — the UK edition does not) it could be good to read alongside the Japanese if you’re struggling to understand what is happening.

However, if you try reading this novel in Japanese and aren’t struggling too much, I would suggest reading the whole thing without referencing the English. Forcing yourself to read the whole book in Japanese can be good too.

You can also take this further and watch the movie or read the manga. Reading/watching the same story in different mediums is a great way to boost your Japanese and comprehension skills.

世界から猫が消えたなら (If Cats Disappeared from the World) is a melancholy story about what is most important in life. It’s a great book for any Japanese reader and I highly recommend it. 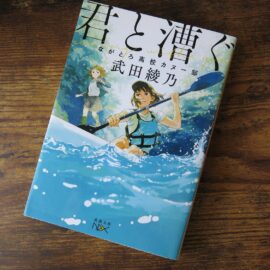 Slice of Rowing Life 君と漕ぐ(Kimi to Kogu) for Japanese Learners