Secondly, a lot of manga is made for adults. This doesn’t mean the content is mature or NSFW, but it does mean comics won’t always have furigana (the kanji readings).

A large portion of manga is also fantasy and sci-fi. Which means lots of vocabulary you probably haven’t come across before. (The first manga I tried to read was Full Metal Alchemist… That was frustrating to try to read. I gave up pretty quickly…)

Manga can be a great tool for practicing Japanese, but you need to find the right manga that’s good for you.

So I’ve come up with a list of five manga that are perfect for practicing JLPT N3 level Japanese.

These manga have furigana, include lots of vocabulary and kanji you’ve probably studied, and useful Japanese phrases used by native Japanese people.

I love Shikimori-san because it’s a romance comedy about a couple who are already in a relationship. Which, if you know romance manga, is uncommon. The fun thing about this manga is the girlfriend, Shikimori-san, is cute but she has these moments where she’s a complete badass. She adores her boyfriend Izumi-kun and will do anything to protect him.

Chapters are short, sweet, and very funny. Making this a very easy and entertaining manga to read.

Read a sample of 可愛いだけじゃない式守さん on Bookwalker!

You may have heard of this manga because of the anime by the same name. If you haven’t, Gekkan Shojo Nozaki-kun is another romance comedy about a girl, Chiyo-chan, trying to impress the guy she has a crush on, Nozaki-kun. The only thing is, instead of confessing her love for him she accidentally ends up working with him on his shojo manga.

This manga is a hilarious with a lot of shifts in gendered stereotypes. It’s a little similar to Shikimori-san but is very, very different at the same time.

Again, because this is a high school manga there are daily conversations. However, because the focus is creating manga there are a lot of manga industry related terms. Luckily this manga explains those to the reader, so it’s very educational if you’re interested in manga Japanese!

I feel like Nozaki-kun has a lot more diverse grammar than Shikimori-san and can be a good challenge for some readers.

Read a sample of 月刊少女野崎くん on Bookwalker!

Another romance comedy, this time about shogi! But unlike Nozaki-kun there’s not that much shogi terminology, the focus is mostly on the two leads, Urushi and Ayumu.

Urushi is a shogi master and Ayumu is her kohai in the shogi club. Ayumu has sworn to himself that he won’t confess his feelings to Urushi until he wins against her in shogi. Urushi kind of knows he has a crush on her but is very tsundere herself. So the chapters are mostly the two of them playing shogi, flirting, and teasing each other. It’s very cute and funny.

The conversations in each chapter flow really nicely without too much background noise (SFX and backgrounds, etc.). This makes it a very easy manga to read. It’s very similar to Shikimori-san in this regard, and similar when more characters are introduced in later volumes with more high school related hijinks.

A fun read with clear conversation flow, everyday Japanese, and some shogi-related terminology.

By the way, the title is a pun because 歩 (Ayumu) is the main character’s name and 歩 (fu) means “pawn” in shogi. So それでも歩は寄せてくる means “And Then Ayumu Advances” and “And Then the Pawn Advances”.

Read a sample of それでも歩は寄せてくる on Bookwalker!

This is not a romance comedy (unless you count the main character’s love for her cat…) This manga follows Riko, an office worker who is also a massive game otaku. She goes home on time everyday and never partakes in after-work events or overtime. When a coworker finds a cat she can’t help but say she’ll take it. Then hijinks ensues.

This is a bit more of a challenge with a lot more advanced vocabulary, including a fair amount of work-related and game-related Japanese. Because Riko doesn’t know how to take care of a cat she connects anything the cat does back to video games. Which makes this is a great manga for game-related Japanese.

A challenging read good for N3/N2 Japanese, with lots of work and game-related vocabulary.

Note: 猫暮らし (neko-gurashi) means “living with a cat” because it combines ねこ “cat” and くらす “to live (in a house)”.

Read a sample 猫暮らしのゲーマーさん on Bookwalker!

This manga is like a fantasy Yotsuba to! The story follows a very young girl called Shiva and her teacher. They seem to be isolated, with no one else around and all nearby homes abandoned. Shiva also can’t touch her teacher or anyone else otherwise she’ll be cursed.

It has a very strong fairy tale feel to it with a medieval vibe and beautiful artwork.

Because it’s a fairy tale fantasy manga there is a little advanced grammar. But this is a good start if you love fantasy and want to read more Japanese high fantasy stories.

A simpler read than Neko-gurashi but challenging in other ways. Great for people interested in more fantasy but find other fantasy manga too difficult.

Read a sample of とつくにの少女 on Bookwalker! 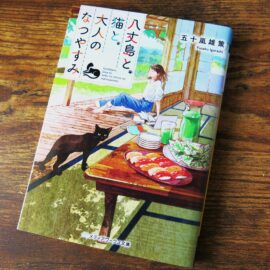 A Simple and Sweet Slice-of-Life – 八丈島と、猫と、大人のなつやすみ (Hachijojima to, Neko to, Otona no Natsuyasumi)