When you go visit Japan you are most likely to eat out in a restaurant at least once at some point during your visit. So here are some tips on ordering, understanding the server and some general restaurant vocabulary that you might find useful.

All the vocabulary and phrases are being added to a new Memrise course on the JTalkOnline Memrise page!

There’s also a general course that has the basics on restaurants along with a variety of other topics: Essential Japanese for Visiting Japan

Last week’s post: Different types of Japanese restaurants and what to expect

The servers in the restaurant will probably first greet you with an energetic いっらしゃいませ which means “welcome!”, followed by なんめいさまですか which means “how many of you are there?” in keigo (formal Japanese). Which you would need to reply with the number of people in your party. You do this by indicated the number with your hand along with saying the number of people (listed below) followed by です. So if there are 2 people you would say ふたりです or 3 people would be さんにんです.

Counters for people is easy because besides one and two people (which are irregular), all the other counters are just the number followed by にん, which means “people”.

(Extra information: This comes from the kanji for people 人 which can be also be read as ひと which is the noun for “person/people” or read じん, which you add to the end of a country to say “people of the country” i.e にほん which means Japan becomes にほんじん which means Japanese.)

The server will then show you to your table with どうぞ、こちらへ “please, this way”. どうぞ is an inviting word that you use to guide people, offer them into your home or offer them to sit down. こちら is the polite form for ここ or “here”.

When you’ve decided where you’re going to eat you may have to order your food a number of ways. As I explained in a previous post about Restaurants in Japan you can have the option of checking out the food from the menu out front as many places will have plastic food displays. Or you might have to pick from a ticket machine. And/or the server will come and take your order if you call them or press a button on the table.

Japanese food ticket machines (食券・しょっけん) will either be computers with a touch screen or using buttons (see two images below). 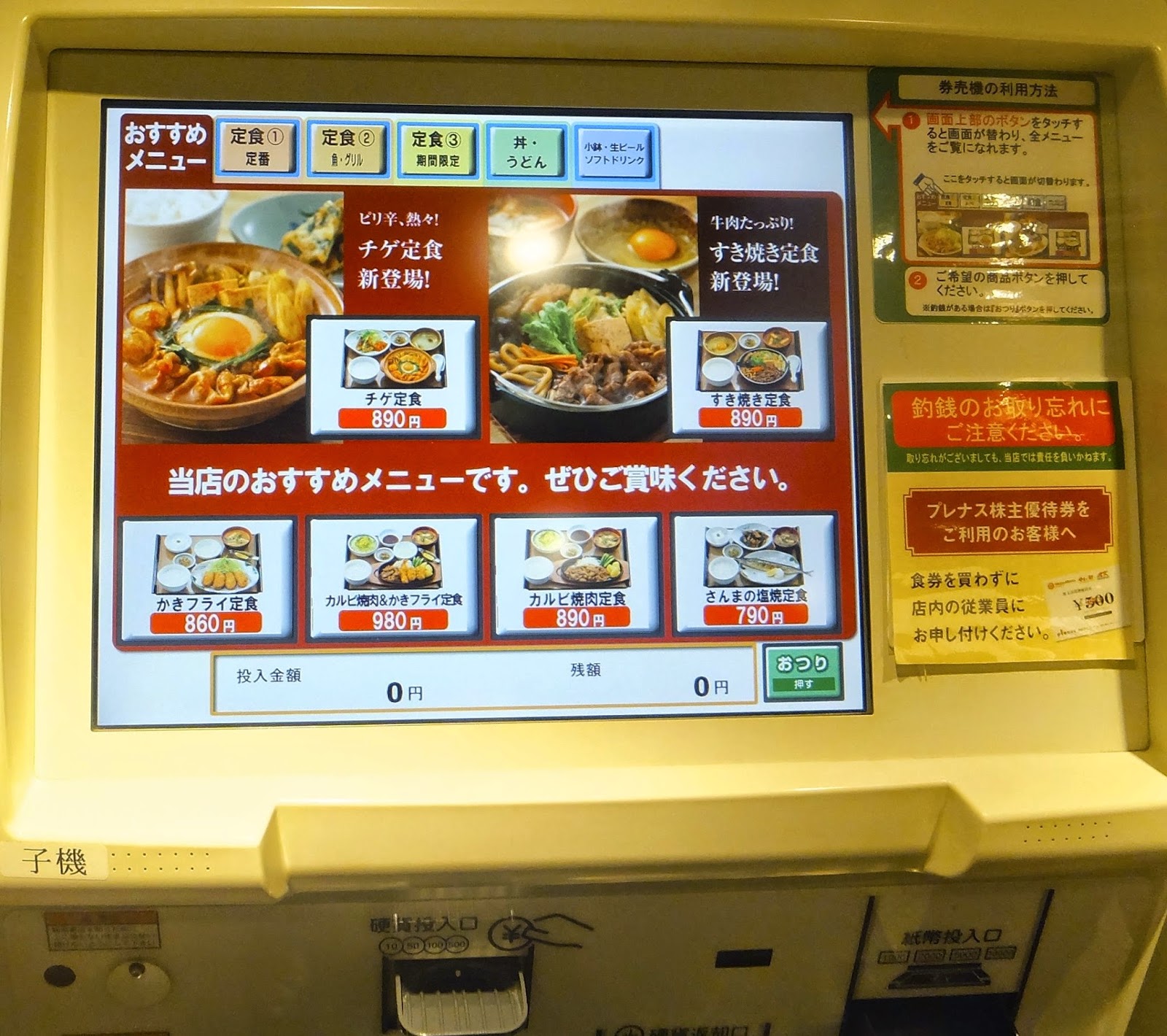 When you have a computer screen they often give you more options and as you can see on this one there are 3 buttons at the top which say 定食 (ていしょく), one that says 丼 (どん)・うどん and the last is a drinks button with 生ビール and ソフトドリンク. The main part of the front screen consists of the おすすめ or “recommendations”.

定食 (ていしょく) means a “set dish” which will often be a main dish (fish or meat) with a side of rice and miso. For example, the recommended dishes on the front screen of the image above includes すきやき定食 (right hand large image) which shows you a big image of the すきやき (fried beef and vegetables) with a smaller image of everything included in the set dish such as rice, miso, egg, and pickled daikon.
If you zoom in and get a closer look at this image you can see the images of what a ていしょく includes clearer.

You often need to put the money in before pressing the button of your chosen order. This means you can browse the menu, put in the necessary amount and choose your order. Try not to put money in before you’ve chosen incase you pick something you don’t want. A ticket will pop out of the bottom of the machine but to get your change you need to press the おつり “change” button at the bottom left of the screen. 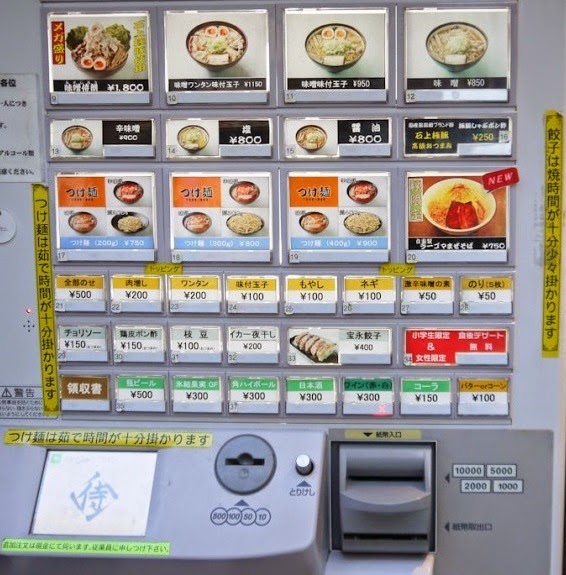 The above image is a ticket machine from a ramen restaurant. Because of this your options are a lot more limited, but similar to a touch screen machine you can also order drinks and side dishes with this machine. The main items to order are at the top and they might sometimes comes with pictures. Extras to add to your ramen like ねぎ “onion”、のり “seaweed” or sides like 餃子 (ぎょうざ – there’s a small picture by this one) are on the smaller buttons at the bottom. As you can see these are colour coded too, so in this restaurant extras for your ramen are in yellow, side dishes are grey and drinks are green.
The same as the previous machine, you need to put your money in before you select your order.

Ordering off the Menu with a Server (rather than machine)

After being seated the server will hand you a menu. If you don’t think you can handle a Japanese menu you can always ask for a English one: すみません、えいごのメニューがありますか？ (or in Romaji for those who struggle with kana and will need an English menu “sumimasen, eigo no menu ga arimasu ka?”) = “Excuse me, do you have an English menu?”

When you’ve decided you indicate to the server either by pressing a button on the table (if there is one), grabbing their attention by shouting すみません or sometimes they’ll wait to see if you’re ready. List what you want by saying the food/drink followed by how many you want. Be careful because food and drink have different counters for them!

For example if you wanted a miso ramen with a coke you would say みそラーメンひとつとコーラいっぱいをおねがいします. Don’t forget to add “please” おねがいします to the end of your sentence. You can also say ください which are both used interchangeably when ordering. (If you’re unsure about the difference between these there is a good explanation here.)

The server will often repeat the order with the number of each items so that they know they have the right order.

Phrases the Server Will Use (keigo)

I already mentioned that a server will say いっらしゃいませ when you first arrive followed by なんめいさまですか (which means “how many of you are there?”) and どうぞ、こちらへ (“please, this way”)

When you’re ordering these are the kind of phrases they will use:

ごちゅうもんはおきまりですか – Have you decided on your order?

ほかになにか – Will there be anything else?

Your bill will normally be given to you after they bring you your food, if you order more they will bring you a new bill. If you’re in a situation where the servers didn’t give you your bill you can ask for it. There are 3 words used for bill かいけい, かんじょう and あいそ (not “bill” because it will sound like ベール and you will be given a “beer” and not the bill!!!). かいけい and かんじょう mean “total” or “calculations” and “あいそ” means “courtesy” but when used in this context they are understood as “bill”. To make your request polite you should add お to the beginning of the nouns for bill, followed by おねがいします.

I previously mentioned touch screen ticket machines, well some places (like sushi-go-rounds かいてんずし) will have screens on your table you can use to order with, like this image below. 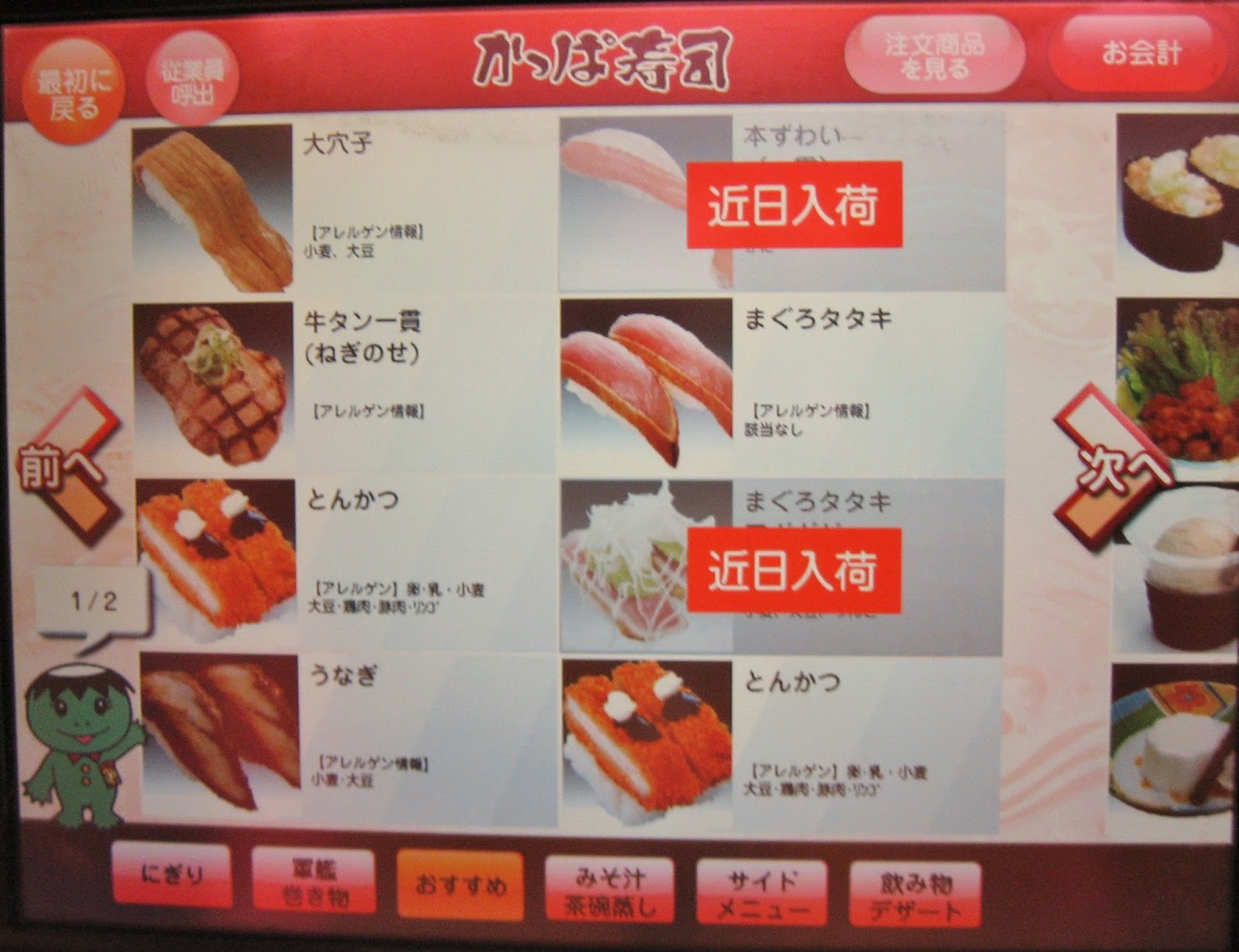 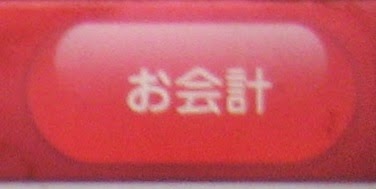 If you look in the top right hand corner you can see お会計 which reads おかいけい. When you’ve finished eating press this and the server will bring you your bill.

When the server comes to bring you your bill you can request for it to be together on one bill いっしょおねがいします or separately べつべつおねがいします.

At all Japanese restaurants you take your bill up to the till/cashier at the front of the restaurant to pay, and you never ever tip! (Tipping is seen as something rude and if you try they will think you’ve forgotten your money and chase after you to return it).

I hope this helps when you go to order in restaurants! Don’t forget to study up on the Memrise course

Giving and Receiving in Japanese