“I want to be able to speak Japanese but I’ve never done it before and don’t know how.”

I remember when I started learning Japanese I did not speak that much. I actually barely spoke Japanese for the first 2 years of my study! This was a HUGE mistake!

I didn’t start actually picking up the Japanese fast until I was in Japan and forced into situations where I HAD to speak. So how do you force yourself to speak as a beginner?

In Videos About Learning Languages every single person giving advice on becoming fluent in a language emphasizes the importance of speaking.

Speaking is important because your brain has to use it.

When you study you are training your brain to knit together the paths that connect sound, images and meaning together. You have to study them frequently over regular intervals to get those fixed. But you’re just parroting what you’re studying, your brain isn’t actively storing the information right away. Using the language (through reading, writing and speaking without references) is what forces your brain to lock onto that information. The more you use it the stronger it is in your mind.

That’s why it’s important to use Japanese, and not just study it.

How to Speak Japanese as a Beginner

In A Simple Way to Start Speaking Japanese I list 3 important techniques to start speaking:

But these aren’t just things you do once, you need to constantly do them. Go through each of these steps at least once a week.

When you’re a beginner you think things like “I need to learn all these things before I can have a conversation.” “I can’t speak Japanese so I’m not going to.” “It’s too scary.” Or “I’m worried about making mistakes.”

Speak Japanese with a Japanese Person (Speaking Partners and Preparing)

You can find a speaking partner to practice Japanese with through websites like italki.com (skype) and MeetUp (in person).

If you can get more than 1 then great! Try and schedule meeting them regularly so you’re speaking with someone at least once or twice a week. The more you speak, the better and faster you’ll get!

One of the best tips I’ve heard for beginners wanting to speak is: In the first week write a script in Japanese for your first conversation.

Look up the vocabulary and grammar you need for say “I’m Joe”, “I am American”, “I like movies” etc. Just basic sentences, it doesn’t have to be fancy.

Also make note of “__ wa nan desu ka?” which means “what is __?” You can use this when you want to ask what a particular word means.

Write down questions you want to ask them.

Also make a list of vocabulary you think will be useful.

Read these (out loud) over and over throughout the week. You don’t need to learn them off by heart. The more you use these phrases and word the more natural they will become and you’ll find yourself using them without memorizing them like a robot.

Watch it back and think about what’s no right. Maybe you need to work on your accent? Maybe it could have been a bit faster?

They don’t have to be long videos, even just a single sentence is enough to give you some good practice and feedback.

Try doing this every day for a week or two before meeting your speaking partner. Don’t put it off for a month+ otherwise you may never start speaking Japanese!

When you arrange to meet with someone try to have it so you both speak Japanese for 30-40 minutes, and then you both speak English for 30-40 minutes. Switching between the two constantly will make it less effective as your brain always wants to take the easier route (English). So you may find yourself not speaking any Japanese if you’re not careful.

When you meet with your speaking partner slowly go through the phrases, using your script as reference if you need to.

Ask them questions too! If they say something you don’t understand, ask them what it means.

Make note of words or phrases that come up that you don’t know or find interesting.

After and hour your brain will hurt but that’s because it’s worked so hard!

Keep doing this regularly. Learn the vocabulary you’ve picked up, write new scripts and phrases, speak with your partner(s) as often as you can.

Someone once told me they had planned to write a book. They wanted to write a book but 2 years went by without them writing anything! So instead of constantly putting it off until tomorrow they finally said:

“I will do a little a day, even if it’s just one sentence.”

And you know what? The book was written.

This is the same with languages. Don’t say “I’ll do an hour a week”, say “I’ll learn at least 1 word every day.” Even if it’s just 1 it’s better than nothing! Even if you only spend 5 minutes, as long as it’s everyday, you’ll slowly build it up.

Try and say a sentence in Japanese randomly during the day.

Learn a word, or 5 words using Memrise when you have 10 minutes waiting for someone to turn up.

Language is a tool for communication and being able to communicate with others is half the fun of learning another language!

Going to Japan for the First Time Tips & Tricks 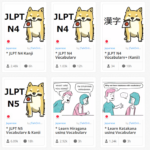