Here are a few lessons I’ve learnt over the years studying Japanese. I hope these come in handy with your own study.

Just because you feel like you should know something doesn’t mean you do.

There have been many times when I’ve been studying and gone “I already know this I don’t have to do it again.” But just because you’ve studied it doesn’t mean you actually know it.

This caused me to waste more time going back over something I felt I should know but when I came across it outside of studying. I knew I knew it but I didn’t know exactly what it was.

Although you’ve only just studied something like a word, kanji compound, or piece of grammar, you should go over it the next day, and then in a few days, and then the next week. You’ll find yourself retaining the information better that way.

Focus on one thing at a time. 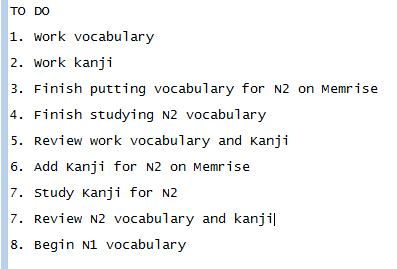 I have had many times when I’ve thought “I will do an hour of kanji, and hour of vocabulary and then I need to study grammar, but I also need to practice my reading and listening and…” and then my brain short circuited.

Trying to do too much at once is bad for your brain and your motivation.

So instead make a priority list of what’s the most important items you need to learn and then work your way through the list.

This doesn’t have to be a list with a time limit either, the image on the right is my own to-do list which I’ve been working through for a couple of months now. I find that I’m learning more and becoming less panicked with studying because I don’t feel like it’s stuff that I need to get done in 1 day or 1 week and I’m not needing to focus on too much at once.

Learn from a Japanese teacher and get as many lessons as possible.

Self study is great but I’ve found that every time I learn from a native Japanese teacher (who’s trained as a teacher and not just a language exchange partner) I learn so much more and quickly, and I find out things I wasn’t expecting to learn.

I’ve had classes with a private teacher once a week and at University in the UK but some of the best Japanese learning I’ve done was when I’ve visited Japan for a few months studying at a school, which if you save some money during the year is a great way to spend the summer holiday (review of one school NILS in Fukuoka)!

Make note of unknown words you come across and learn them.

This was one thing I always knew I should do but after I made a note of words I didn’t know I just left them. Not really knowing how to study them I just left them making them completely useless.

It was only recently that I’ve found Memrise and began to use it for the purpose of learning words I’d come across at work, in emails, in articles and books.

Focusing on my work vocabulary first I’ve actually been able to practice the vocabulary and kanji I regularly come across making using Japanese incredibly useful.

Memrise allows you to create your own flashcard lessons which you can practice on the computer and on a handheld device. It also spaces reviewing sessions out wide enough to get regular practice of words without forgetting them. So if you have a pile of vocabulary you’ve been meaning to learn go and put them into your own Memrise course. The data entry part might take a while, but it’s worth it in the end!

Practice when you’re not studying.

When I was at college and university I would write Japanese into my notebooks whenever I found the opportunity. I would also carry a dictionary around with me if I thought up a word I didn’t know. Practising Japanese outside of your study time and just trying to think up random sentences is a great way to practice active Japanese rather than simple memorisation.