The 「Try! 日本語能力試験   文法から伸ばす日本語」or “Try! JLPT – Studying Japanese from Grammar” is the best Japanese grammar book I have ever used for learning JLPT grammar.

I mentioned before that grammar is my weakness. I am so bad at grammar, partially because I don’t know English grammar (terms, I know how to use it naturally), and partially because I find it difficult and boring to practice. HOWEVER, this is the first time I’ve actually understood Japanese grammar and enjoyed learning them!

Try! is a fairly new series of grammar books published in 2014, so unlike Nihongo Somatome and Shin Kanzen Master, they’re not very well known. 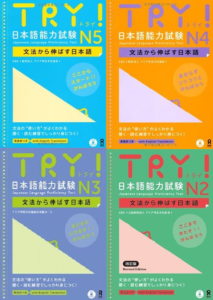 The Layout of Try!

Try! Has grammar books for all levels of the JLPT from N5 to N1. It was the N1 book that I was using so I’m going to explain using reference to the N1 version.

*The book comes with a CD which has recordings of the short texts as well as some other grammar points, and some audio questions for each chapter.

I found having the explanation in English as well as Japanese with the examples so incredibly useful for learning how and when the grammar is used.

The example sentences are then followed by some practice questions. These are very simple questions, but they’re there, not to give you a feel for the JLPT, but to check that you’ve understood the grammar, how it works and when to use it. The question layouts are not all the same either and some grammar points are so simple they don’t even have questions.

The end of each chapter then has questions in the JLPT format covering the different formats that appear in the JLPT, including a listening section to help you learn how to listen for the key grammar points in sentences and statements.

The end of the book has 2 very useful features. The first is a list of similar vocabulary from previous JLPT levels and explains how they’re different. And the next part lists all the grammar in the book and groups them by what situations they’d be used in.

One of the great things about this book is that it has furigana, but it will only appear with kanji compounds for that level (i.e N1 compounds and vocabulary), and will often only appear once. So the entire text isn’t FULL of furigana, but there’s enough so you don’t loose time constantly looking up readings in a dictionary.

It teaches the grammar to you in the context of Japanese situations, texts and sentences, rather than some grammar books or websites that just have the description and some example sentences. The explanations in the Try! books are (I felt) very clear, apart from a few that I didn’t get and had to look up online. (Unlike the Nihongo Sometome books you need to look up practically every grammar point).

The grammar is grouped by situation rather than similar grammar (which just confuses me), but it still has notes to other grammar in the book that’s similar sounding but has a difference meaning. So you don’t learn them at the same time, but you’re still aware that some grammar (such as あっての and にあって) are different and used in different situations.

I highly recommend that you go out and buy this book if you’re studying for the JLPT. Especially the higher levels of N3 to N1!

I love this series so much I am going to but the N2 grammar book and go back over grammar that I didn’t learn/probably forgot!

Japanese Textbooks for Teaching Yourself Japanese

Lessons Learnt as a Beginner Translator