(To recap from the previous post on Keigo)
Keigo 敬語 literally means “respectful language” and is used in formal situations (but mostly business). If you are studying Japanese at university you will go over this. So this entry is to help with people who will go to work in Japan (teaching English or other business) and for university students.

So just to help this is a good diagram of the different keigo. Believe it or not the ます form of the verbs you learn is a form of keigo which is used between equals (marked as “fair” in the diagram. This is also called teineigo). When you use this it it with a stranger and you don’t know their social standing, or someone on the same level as you (ie age, rank in a job etc). Sonkeigo is used to elevate the person you are talking to, and Kenjogo is used to push yourself down. Sonkeigo and Kenjogo are used together, you wouldn’t mix these with other forms of keigo.

In order to reduce the confusions these keigo entries will be split up and won’t come one after the other but on random weeks. Each focusing on a different type of keigo. I will also try and make each of them situational with example conversations and key phrases in bold (rather than just listing the verbs like most sites do, although there will be a list for reference) to make it easier to learn. 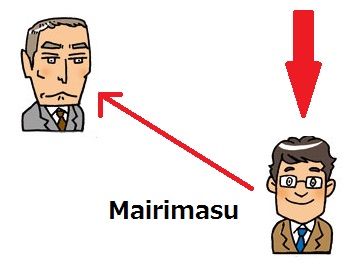 Unlike sonkeigo there is only one form used for kenjougo (when the verb is not irregular):

The following are special words that get changed COMPLETELY in kenjougo:

I know I said I wouldn’t list just vocabulary but these are good to learn before you try to jump into practising using them in sentences.

Below are some situations with these words used in a phrase in the context of a situation. As mentioned they are only used when talking about the person who is higher up than you, and when you are talking to them or to someone else (about yourself). The kenjougo is highlighted. Besides practising these think up some of your own sentences you might use when talking to a boss or someone you don’t know and check with people on Lang-8 to see if it’s correct or not. If you have a one-to-one Japanese teacher it really helps to practice conversations with them in keigo.

You: 失礼いたします = Please excuse me (set phrase for finishing on the phone instead of ‘goodbye’ like in English)

You notice how the person says “おります” for the person you are trying to get in contact with. The person you are calling is a higher status than yourself but they are part of the company the receptionist is representing. The receptionist uses おります (kenjougo) instead of いらっしゃいます (sonkeigo) because she is humbling the company in relation to you, the outsider/customer. Often when a person within a company is talking about someone in that company to a person outside the company they will refer to that person in humble form and might even remove all name endings like さん.

But when you are referring directly to people in your company such as co-workers or your boss you use sonkeigo when you talk about them (as described in the sonkeigo post you use different sonkeigo between your boss and your co-workers).

Apologies for being late/changing meeting time

今日１時にそちらに伺うことになっていたんですが。。。= I am supposed to meet you at 1:00 today there but…

わざわざお時間をとっていただたのに。。。 = Even though you took the time for me…

できれば、 のご都合のよい日に変更させていただけないでしょうか = If possible, would you allow me to change the day to a more convenient time?

ありがとうございます。本当に申し訳ありませんでした。= Thank you very much. I am sorry for troubling you.

When you say someone is doing something for you, or asking if they will allow you to do something, in a regular conversation with a friend you would use てform with くれます, but, as you can see above, because you are using keigo and referring to yourself you change this to いだだきます.

You are a foreigner and Japanese people will understand if you make a few mistakes (even Japanese people don’t know how to use keigo properly sometimes). So don’t be too worried about getting everything perfect. If you can find a Japanese person to practice with (like a teacher) then great. It’s also good to learn to recognise these so you can understand when staff are talking to you and asking you questions.

If you would like more information and practice using keigo this is a great pdt that outlines everything very clearly and includes practice exercises: ParaPara Penguins